Modern beatmaking has seen an huge comeback of Lo-Fi sonorities, such as pitch warping. This effect, made popular at first by its symbolic reference to record sampling (being it the original mean through which beats were created in the beginning), then by its organic character, used to give warmth and liveliness to static and synthetic timbres, it’s based on smooth pitch variations applied to the incoming audio, reminiscing of old school tape cassette players. In this article, we’ll take a look at how to recreate it using TTAP and a modulation source (we’re going to use Modulators 21 LFOH! for this purpose) by setting it up in order to work as an audio buffer with real-time warping capabilities. In addition to that, we’ll see how to use TTAP’s features to add amplitude variations and stereo width.

First of all, let’s put some audio into TTAP. We find that chords, pads and sounds with long decay in general make it easier to appreciate the warping, but of course any kind of material will do. Let’s load TTAP and LFOH! on the track where the audio is going through.

Now let’s set up TTAP as it follows:
– Time should be in free mode – this is the parameter that generates the fluctuations and having it operating in milliseconds guaratees an smooth movement of the audio’s pitch, compared to Sync mode which has stepped values related to the host’s tempo divisions;
– Balance should be all the way up, at 0% – this means we’re going to listen to the first delay line only, this way we’re sure we’re not adding too much textures to the original signal;
– for now, let’s disable the first envelope – having it turned off is good to have a constant flow of the incoming audio, however we’ll see later how to use it to add some amplitude movements to the effect;
–  all of the effects, Feedback and Filter at 0% – we don’t want to alter too much our audio, neither we want to use TTAP as a delay;
– Mix all the way up to 100% – within this configuration, having only the wet signal to pass through allows us to listen to a copy of the incoming audio yet being able to play with its pitch.
At this point, the audio should be passing through completely uneffected.

Now we’re going to take advantage of TTAP’s Time interpolation to recreate the warping. Let’s turn at LFOH! and assign its modulation target to TTAP’s Time. With the audio running, you should now hear its pitch moving all over the place (which is definitely too much!) and that’s because we still need to adjust its modulation range. Tape fluctuations are usually not too much prominent, they’re mostly subtle yet clearly audible. Keeping the range between 0% and 12% should do for our purpose. Now, by controlling LFOH!’s Time and range, we can control the warping speed and intensity. Also, by deciding to use LFOH!, we have access to a lot of different parameters to define our waveform, which come in handy to describe different tape behaviours. For instance, a regular sine wave can be used to evocate a faulty player, while more irregular and/or abrupt shapes are going to remind us of jammed tape’s scrolling or broken playheads and so on… At this point, playing around with LFOH!’s settings is a good way to travel back in time and look for the precise feeling you’re after.

After we’ve set up all of the dynamics, we can come back to TTAP and start adding some additional details to our tape machine. If we reactivate the first envelope, we’ll start hearing some fluctuations in amplitude as well, similar to a tremolo. We can play with its settings and define different kinds of movement and, by playing around with Section, we’re also able to set up its frequency. If we want to widen the stereo image of our fluctuating audio, we can start playing around with Spread as well, in order to have each section placed randomly between the left and the right channel. 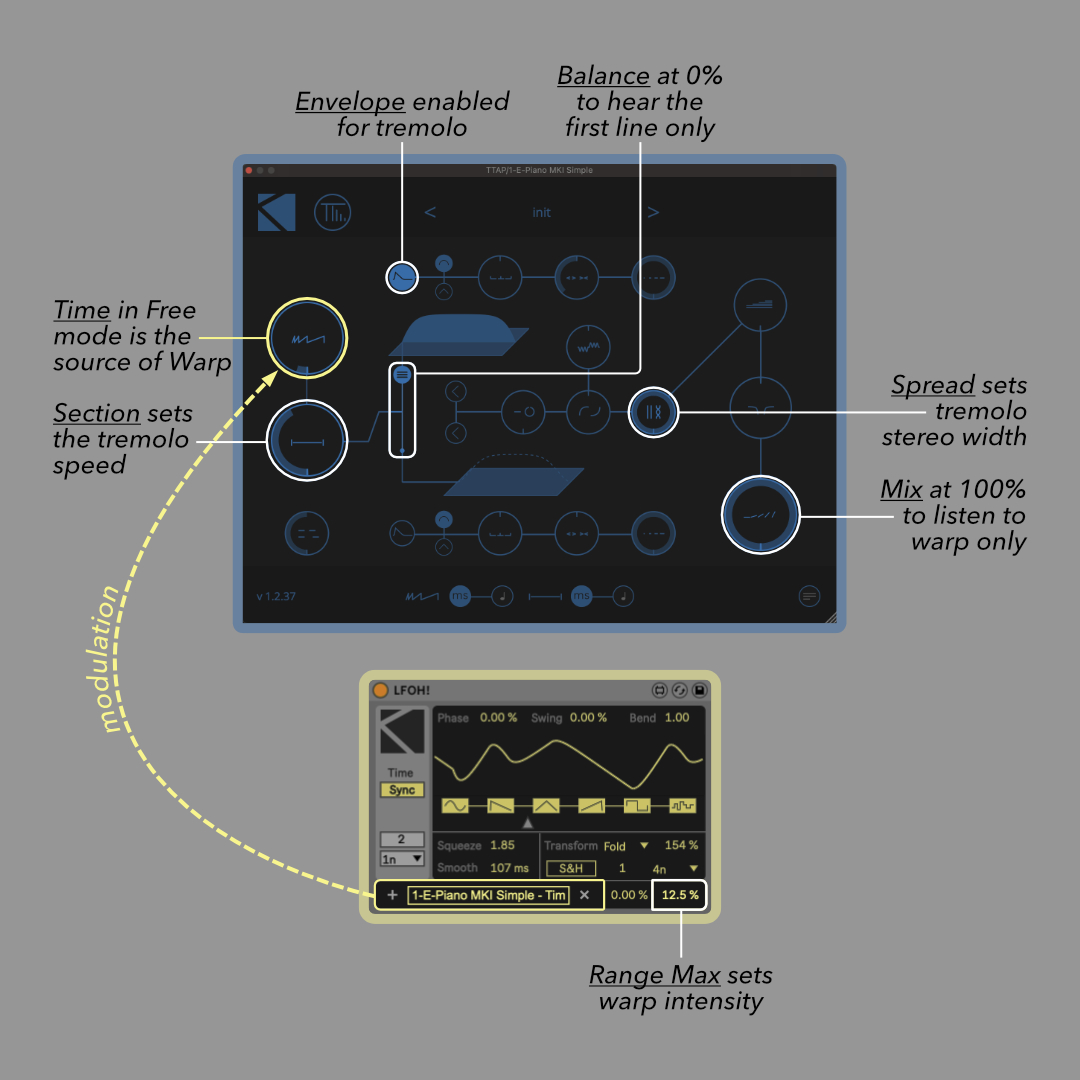 There you have it, a tiny, unconventional tape machine, ready to be twisted according to your liking. Explore how the rest of TTAP parameters integrates with these warping dynamics, define different tape behaviours by playing around with your modulation source and discover unusual ways of pitch bending your audio!