Nowadays, an incredible abundance of sound generation escamotages is pushing the boundaries of electronic music research. From frequency and amplitude modulation, to sampling, granular manipulations, physical modelling and so on, it’s becoming more and more necessary to define personal routines that help describing musicians’ personality. A renowned form of tone-shaping practice, that’s been gaining a fresh round of popularity among the electronics community, is the so called West-Coast or additive synthesis, pioneered by Don Buchla in the ‘60s with his line of hardware synthesizer and commonly compared against Robert Moog’s subtractive (or East-Coast) synthesis, which had been developed during the same period. While subtractive synthesis has become the most popular form of sound generation, due to his relatively easier logical approach, Buchla’s additive way of combining waves has always been noted as a technique capable of creating more interesting and experimental tones, despite it miselading “harsher” results. Moog’s smoother approach to synthesis (eg. using standard keyboard layouts to input notes) was based on superimposing different waveforms on multiple levels, creating complex and rich tones, from which a filter was used to remove harmonical components (hence the name “subtractive”) while, on the other hand, Buchla’s more experimental sound vision foresaw interesting results in directly summing signals, starting from very simple tones and gradually growing them richness by adding harmonics, beatings and crossmodulations.

Starting from this idea, I’ve started exploring TTAP as a slightly minimal synthesis engine that can, in fact, combine both of these opposite schools and lead to very captivating sonical results. I’ve been using an oscilloscope throughout the way, in order to make the concepts as clear as possible, but I encourage to focus on your hearing when it’ll come to mingle the sounds yourself.

1 – Let’s start by feeding TTAP with a simple sine wave. We’re using Ableton’s Operator, but really any kind of synthesis engine should be ok. Let’s set TTAP mix completely dry, play a note and look at the oscilloscope: we’ll observe a pure and nice curve. Before doing anything else, we should set TTAP’s ‘time’ and ‘section’ to really short amounts of duration: let’s switch their mode from music-related to milliseconds and set their values all the way down to 5ms each.

2 – For now, for the sake of explanation, we’ll only focus on the first delay line (the upper one), so let’s grab the balance fader and move it all the way up. At this point, slowly bringing up TTAP mix until 50% we’ll start hearing our sine wave mutating, effectively getting harmonically richer. What is exactly happening?

Our plain sine wave is getting delayed by a really short amount of time (5 milliseconds) and its delayed reflection is passing through the first delay line’s amplitude envelope, getting morphed into a different kind of wave. The resulting wave is then added to the original input, creating a wave that’s the result of the intersection between the two. If we bring the mix all the way up to 100% we’ll be able to hear only the derivate wave (and observe it onto the oscilloscope). Let’s keep it this way for now.

3 – Following the previous logic, the first delay’s envelope parameters give now us have access to a cycling amplitude envelope to further shape our derivative wave:
– moving ‘peak’ toward one direction results in a harsher transient of the wave;
– ‘warp’ adds a curvature to the transient that can help making it either more subtle (extreme left) or punchier (extreme right);
– ‘length’ acts as a kind of duty cycle for the derivative wave (reducing its value leans the wave’s peak beyond its first half of the cycle).

Playing with all of these parameters together drastically changes the resulting waveform. On the top of that, we also have access to the envelope’s shape.

The same controls apply, of course, to the second delay line, with the addition of the ‘gap’ parameter which control the phase offset of the second wave in relationship to the first. If we move the balance fader in the middle, we can hear two different derivative waves intersecating and start manipulating the second delay line’s parameters as well. 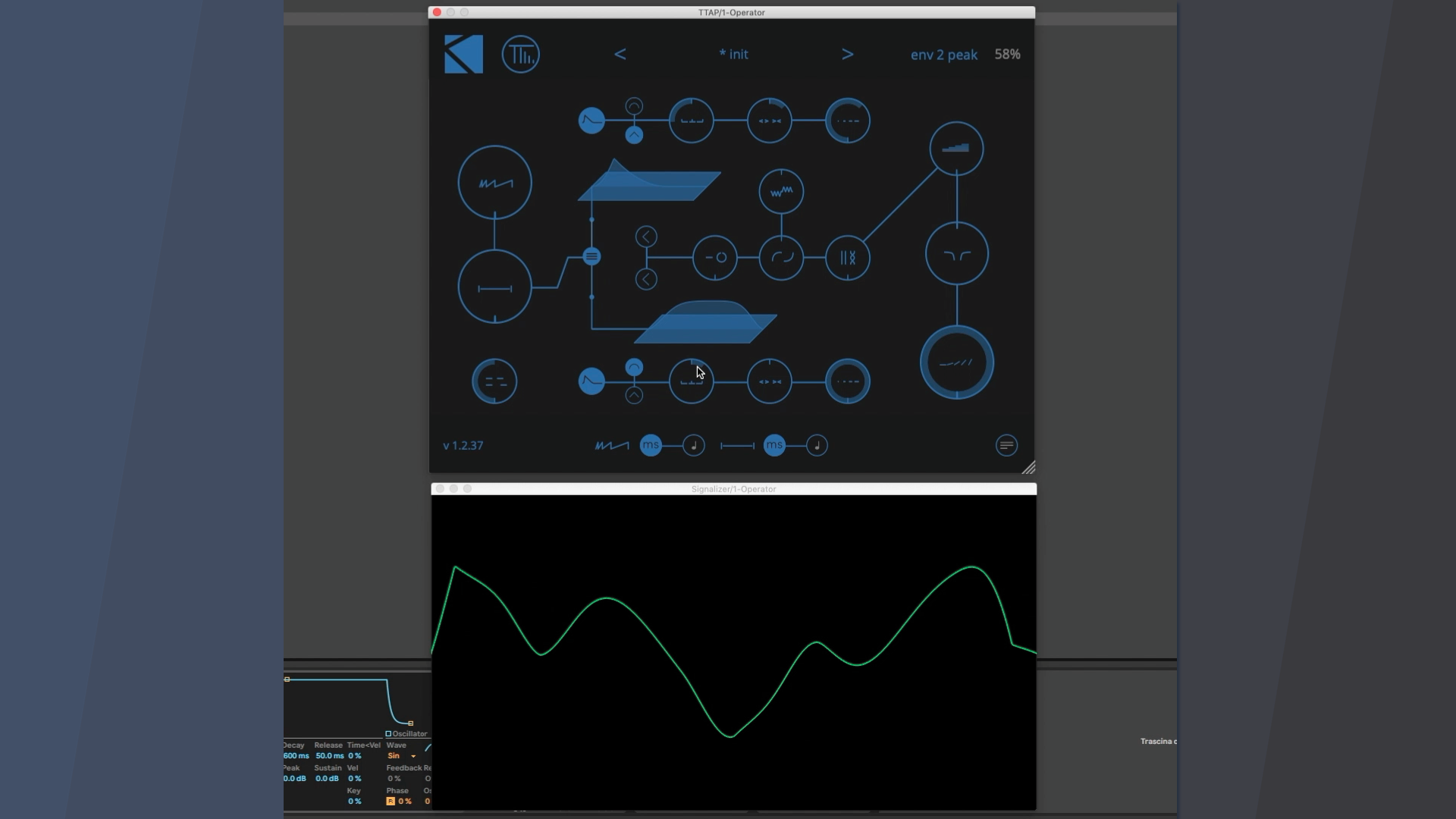 4 – After understanding the delay lines, we can go a couple steps further by taking a look at the shared parameters and how they modify our sound:
– ‘repeat’ introduces chaotic glitches that can really mess up the whole thing (so it’s better not to use while in audio rate territories like now);
– ‘spread’ opens up our monophonic wave toward the stereo image (adding a just a bit of spread helps generating non destructive textural details);

The ‘bend’ section can become pretty deep: if we think about it, it effectively morphs our waveforms, adding a wave-foldery flavor dynamic. The ‘mod’ parameter can be used to make it slightly smoother of harsher. Now, if you know TTAP, you remember that the whole ‘bend’ is connected to our ‘section’ length, so at this point you can try increasing the section value (without going to touch too much higher numbers – otherwise TTAP behaviour will switch back to be a delay) and play with the ‘bend’ section to listen how this combo affects the final result. This can quickly become pretty intense, so take your time to explore.

5 – So far, we’ve been exploring the West-Coast part of this kind of unusual synthesis chain, but TTAP has a LP/HP filter at the end of its circuit, making it possible to combine our additive wave with a more classic subtractive dynamic. At the very bottom of this experiment, we can balance our resulting tone with our primary sine wave by re-introducing some dry signal using the mix control.

We haven’t been touching the ‘feedback’ control so far, leaving it to 0% the whole time to avoid further distortion. However, if you feel to add more resonance and harshness to your tone, you can bring its value beyond 75% and adjusting the ‘time’ value in milliseconds to play with resonating reflections. This effectively turns TTAP into a combined three parallel synthesis engines (this trick is based upon the Karplus-Strong synthesis foundation of a resonating delay).

It’s crazy how creative you can get with TTAP in terms of sound design: being this true even in its more conventional delay vest, pushing it to audio rate signal manipulation unveils new territories and probably some of the most unexpected tonalities ever, combining (almost completely) three different synthesis mindsets in parallel. Going even deeper, with automations and mappings, can really help enhancing these sounds dynamically in your tunes.

Want to know more about TTAP and how it can manipulate audio signals? Leave a comment or get in touch via the contact form.

One thought on “TTAP – Additive synthesis with audio rate delay”