Thinking about patterns in music, it may come natural to get our mind closer to concepts such as looping and repetition, therefore instinctively referring to less ‘experimental’ musical practices, which is totally fine. On the other hand though, recurring patterns have found their way into manipulation, easily becoming one of the most fundamental pieces of minimalism and avant-garde sonorities, whether talking about electronic music or not. That’s the case of the so called Phase music: an approach to composition made popular by Steve Reich between in the 60s. We already mentioned his work in our previous article, but this time we’re aiming at the essence of his most notable field of research. Just as the wavelength of oscillators (or any wave in general), the phase determines its oscillation’s starting point and, therefore, its relationship with all of the other waves in the same space. The fact that the wave is perceivable to humans is due to its recurring pattern of oscillation and Phase music applyies this concept to musical phrases, using compositional escamotages to gradually reveal an offset between different, apparently identical, voices and making it a deep mean of expression.

Thinking about Reich’s shifting phases composition, this is what usually happens: a melodic pattern is layed down at the beginning of the piece (at this point, it’s possible to hear only one voice, playing a repetitive phrase). Yet the brain of the listener doesn’t know that there are actually two instruments, positioned on opposite sides, at the same distance from the center (essentially hard panned). This immediately starts to become evident when realizing that the phrases are being played at slightly different tempos: one of them slowly starts detaching from the other, revealing a stereo image that’s been unknown before, and intersecating with its counterpart in different ways, bringing the listener to unconsciously wait and foresee the moment when the two are going to be lined up again. This form of composition has been integrated and explored throughout different electronic equipements, especially sequencers, and many variations have been seeing the light ever since.

Whilst most of the sequencers have standard capabilities, MOOR has quite a few additions that can make it a truly deep and satisfying phase shifting tool. In this article, we’re going to explore 3 ways to use its features to achieve interesting results in the electronic Phase music realm.

Before starting diving deeper, it’s important to set up our two voices. The main prerequisite is to have the same instrument on both of them and hard pan them to left and right channels respectively. I suggest to create a MIDI track, drop MOOR and your instrument of choice in, set up a sequence you like, duplicate it and pan the two on the opposite sides respectively. Also, another important thing is that for doing phase shifting loops, we have to give up on MOOR’s chance parameters: steps should be set either to 100% or 0%, otherwise variations will come up between the two voices and the whole phrase perspective will be lost. Now that everything’s ready to go, let’s start exploring. 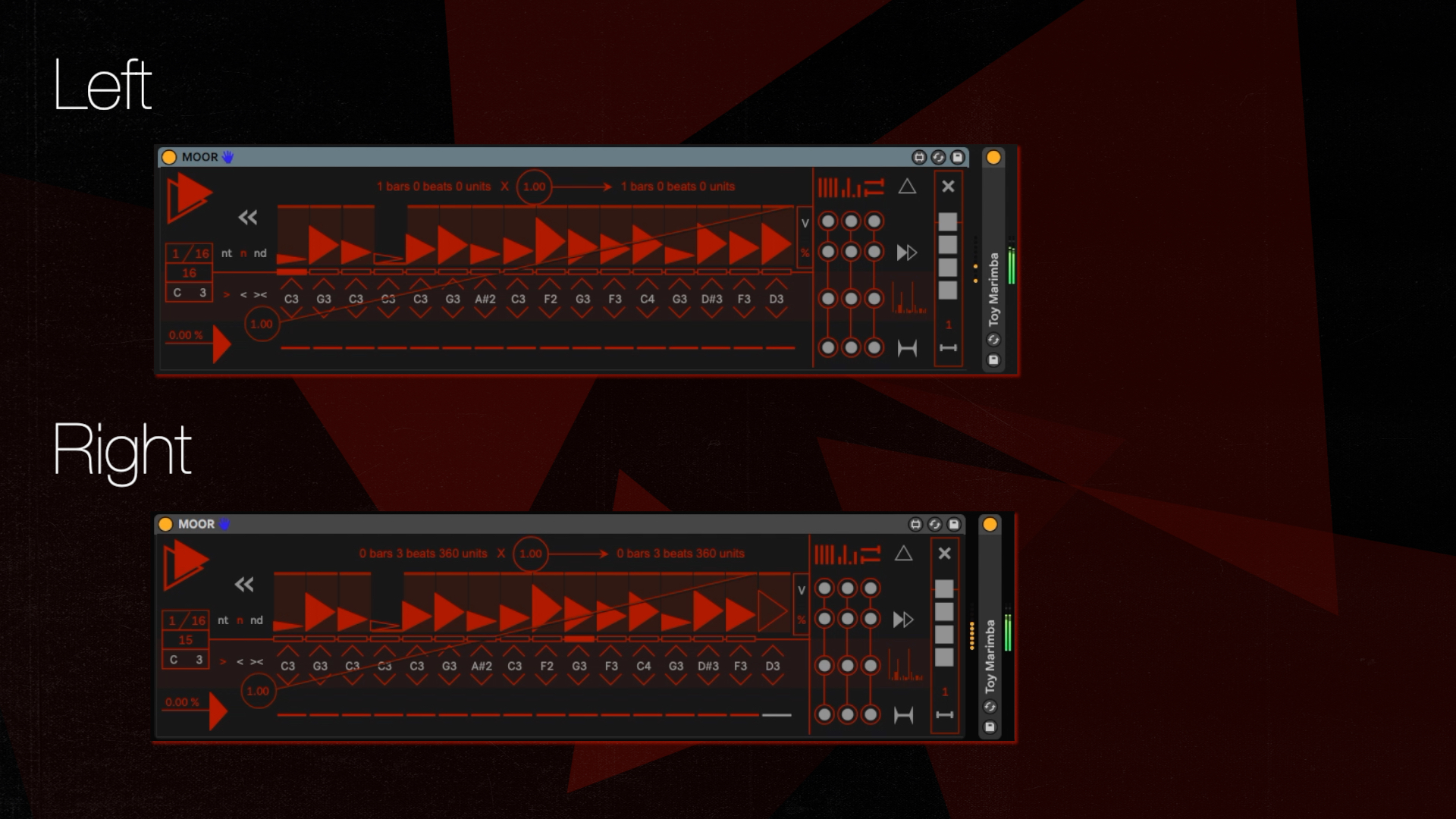 This is probably the most straightforward approach to phase shifting when using sequencers: create a one-step offset between the two voices by simply removing the last step on one of them (ie. if our phrase is 16 steps long, let’s make the second voice playing a 15 steps pattern). While this technically does change the melodic content in it (therefore creating a different phrase) it’s considered to be the most efficient way, also because it takes relatively less time for the two voices to get back in phase, which is good when used in compositions with a wide spectrum of instruments. To do so, simply change the number of steps in MOOR by shifting it down by one value, and press play. Depending on the resolution of your sequence, you’ll hear the phase shifting back and forth in a really pleasing fashion.

2 – Introducing one step with different duration

I personally love this one, cause it’s unique to MOOR and sounds really peculiar. This method is based on the alteration of the complessive sum of all of the steps’ durations of our sequence. This essentially means that we can use MOOR’s durations to remove a little part of our sequence length by lowering/raising the value of one of its steps (it doesn’t necessarily need to be the last one – I encourage you to experiment with those in the middle as well). This allows us to keep all of the notes in our phrase but still being able to achieve an interesting rythmical, yet unconventional, intersection between our voices. You can try altering more than one step’s duration as well (even though the more you gonna add, the less the sequence is gonna feel the same, so be careful). The time for the voices to realign is gonna vary depending on how much discrepancy you introduce. This technique takes a bit longer than the previous one anyway.

Again, this is a technique that’s only achievable in MOOR, and it’s the one that reflects Phase music at it’s very best. By taking advantage of MOOR’s Rate parameter, we can shift the duration of the sequence consistently throughout each step (in contraposition to the previous twos), effectively assigning a different tempo to one of the voices. This can be done by simply changing one voice’s Rate value, resulting in a slower speed when lowered and in higher pace when raised. Again, a bigger difference between the two sequences rates is gonna result in a more drastic effect, even if, in this case, it’s always gonna preserve the phase shifting effect. This one is the most interesting method, as it brings a really “human” element into electronics. Although it’s important to note that this is also the one that usually requires the most time for the two sequences to realign and might fit better into more minimalistic compositions, where the phasing melody is the primary element of the piece. The best results are achieved by giving the two sequences a 0.01 difference between their respective multiplication coefficients.

There you have it: three ways of injecting some interesting Phase music nuance into your music, bringing the popular looping concept into a slightly more complex dimension and adding audio dynamics to MIDI notes, whether you’re looking for animating a techno track, evolving a fluid tempo soundscape experiment or even twisting some bars of your beatmaking sessions. It’s really fascinating how flexible a pattern can become with the right tools.

Get in touch with us using the contact form if you wish to ask more about MOOR and this tutorial.