One of the cool things about creative technology and forward thinking plugins is the capability of easily branching one idea into many different directions and, eventually, bring them close together and refine them in order to assemble the final piece. This comes especially useful during the composition process, when the artists spend a lot of energy focusing on one particular layer and end up with only a single, rich element that needs a counterpoint. In a more specific scenario, they might have taken a lot of time laying down an interesting chord progression as a foundation of the track, surrounded that with lots of cool details but didn’t really manage to grasp a convincing melody to pair with it.

Generate blocks of melodies from a simple harmony is something TATAT can excel at, due to its structure and moody, controlled unstability. If you know it, you know that it’s a really peculiar device, allowing users to set only its boundaries, within which it operates on its own, generating more or less random material: the main requirement for it to play along with the rest of the track are, essentially, 4 notes. Its interesting outcomes can expand and evolve with only few tweaks.

Let’s see how to use it to loop a determined portion of the flowing MIDI notes and dynamically interact with it in order to balance the generative part of the device with its repetitive counterpart, in favor of a captivating musical arrangement.

1 – Let’s start by listening to the chord progression played by Wavetable: it sounds cool but still, it feels like a background to an empty picture. Let’s use Live’s routing capabilities to send its MIDI notes to the “melody” instrument as well (we’re using Tension for the sake of timbre and parameters’ flexibily): clicking on Tension’s MIDI track input menu and selecting Wavetable track will do the trick (don’t forget to set the MIDI monitoring on ‘IN’). Notes written on Wavetable channel are now executed by the two instruments in unison.

2 – Now we have both instruments playing the same chords. In order to convert Tension notes from chords into melody, we must drop TATAT on its track and set the ‘Keys’ on. This will allow incoming MIDI notes to set the 4 root notes on the fly (in this case effectively inputting the notes from the chords). Now we can listen to every single chord on Wavetable playing a new ‘relative’ sequence via Tension!

3 – Up until this point, all we’ve been receiving back from TATAT is a constant flow of MIDI notes built on the top of those chords. Though it is certainly interesting, if we wish to contain the result within some more musical and composed boundaries, it’s necessary to adjust some parameters. For instance, using only the ‘+12st’ setting on the ‘bic’ (standing for bichords) section is a good way to avoid dissonant bichords being generated and easily keep all of the sequence on tune with the main chords. Also, setting some relatively simple time resolutions and a decent variation on the velocity range is a good place to start exploring (since Tension is being used here as our sound source, it’s interesting to listen how different velocity values modify its timbre and how flexible can generally be mapping different parameters’ modulations using TATAT).

The fun part comes when reaching out to ‘liv-mem’ (live – memory) section: this is the essential tool that allows us to round all of the random virtuosisms. ‘liv-mem’ is a MIDI buffer that stores and refresh the generated patterns, according to its ‘len’ (length) parameter, and starts playing back its latest recording as soon as its value moves away from 0%. From that point on, it essentially sets the ‘chance’ to blend its recording with the generated notes, up until 100% where only the recorded buffer is played back (check out the manual for full details about that – available as PDF on TATAT product page). Let’s set its time window on 4/4, to keep the recording consistently long and with a plain measure that’s neither too much quick or weirdly subdivided. If we bring the ‘liv-mem’ value to 100% now, we’ll hear a four bars loop of TATAT’s latest notes sequence playing over and over, regardless of the notes generated in real time. 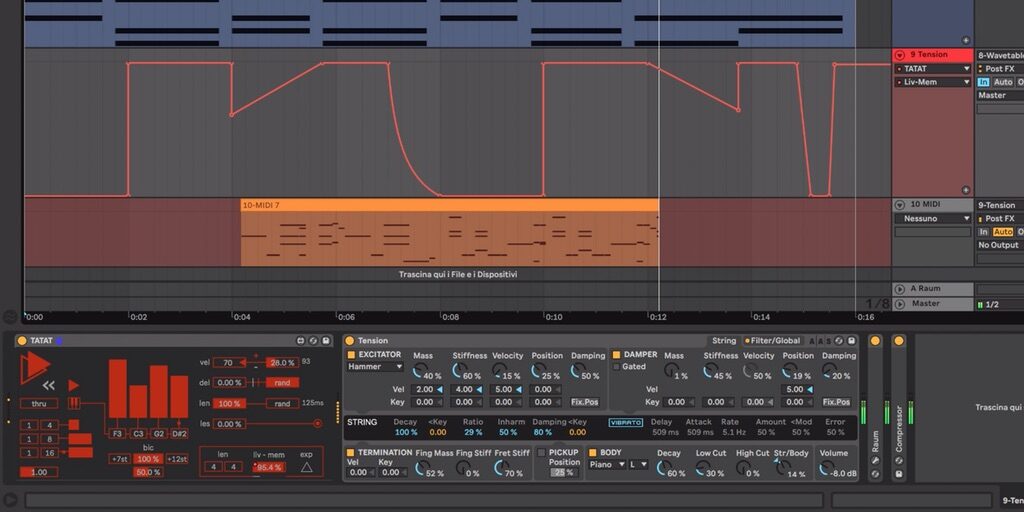 4 – Automating the ‘liv-mem’ value will turn TATAT lunatic intuitions into a powerful melody-writing tool. Letting its value jump between 0% and 100% on the timeline will result in switching on and off the buffer playback (remember that when off, it starts recording again), while any value in between will blend it with the current generative sequence and create some smooth transitions. Having the sequences refreshed and repeated within longer intervals makes them sound extremely musical: fading between total randomness and repetition is a good way to spice up the loop with some additional ‘grace notes’, while its content becomes a new version of itself everytime the automation touches down on 0%. Opening up another MIDI track to record TATAT’s MIDI output is a good idea to store all of its outcome and start crafting advanced ideas.

Having this kind of back and forth dialogue with TATAT is quite an experience and can easily go nuts! There are multiple sonic fields in which having a crazy device on your side can truly flip upside down either a songwriting process or a sound design session. On the other hand, being allowed to keep it on track play makes TATAT a true ally when it comes to catch long lead phrases or even just fill some space with additional, subtle textures.

If you have questions about TATAT or this tutorial, leave a comment or get in touch with us via the contact form.